Haunted Vancouver: Do ghosts walk the halls of Hycroft Manor?

Check out as NPI hits the screen on Global BC evening news:
NPI members Darryl, Connie and Nikki joined Jay Durant (and his cameraman) from Global BC for an investigation at Vancouver's well known Hycroft Manor, reputed to be haunted.

Hycroft Manor is an early 20th century mansion located at the University Women’s Club of Vancouver in Shaughnessy.
It’s a popular spot for parties and weddings, but it has also long been rumoured to be haunted.
There has been countless reported encounters over the years, and employees say they have felt ‘something different’ recently.
“When I walk into certain rooms, you get that cold chill right up your spine that stands your hairs up on end,” says Robert Giardino, Hycroft staff. “And it’s not the kind that you feel ‘oh it’s cold’, it’s the kind that you feel there’s something there that gives you that little fright.”
For Giardino, it all started a few months ago when a movie crew opened the door to what used to be a makeshift morgue. The mansion served as a veterans hospital just after World War II and many of the wounded soldiers died there.
The team from Northern Paranormal Investigations came out to look at Hycroft Manor, but did not turn up anything out of the ordinary. However, that was not for lack of trying. They brought a full arsenal to try and prove, or disprove, the stories of one of Vancouver’s most famous haunted locations.
Among others, there’s a rumour that a woman walks along the hallways of the third floor and one of the guests a few weeks ago says they heard a child crying on the second floor.
Is Hycroft Manor haunted? Maybe. But it doesn’t seem to be a bad place to spend eternity. 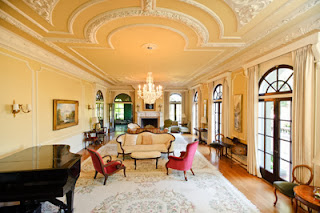