Well, as the days draw closer to Christmas, the team has been very busy both with paranormal related events and personal events. Now that I have some things sorted and out of the way, I am hoping to have more time to post here, share some adventures and keep you updated on this story called life.

The other day we got an emergency call for help, so tonight we will be interviewing the Client and doing a preliminary investigation. I hope we can help this family out, whatever their problems turn out to be, be it paranormal or not.

We are currently going over audio and video from our last investigation at a very old historic building. It was a very interesting night and for me it was even more special as my Dad was there with the Client, as per the Client. I never thought I would get to investigate with my Dad, it's usually my Mom that I talk to about the paranormal stuff, guess I am pretty lucky that both my parents can embrace what I do.  I look forward to see what all my team has found in our audio/video/photo, and am excited for when we present to the Client and my Dad.

For those that are celebrating Christmas, I hope your shopping is going well, your decorations are up and the carols are playing!

It's time for me to run off to our prelim, I hope to be able to update you soon on that and other things we have been busy with.  I wish everyone a wonderful loving caring day. If you can, share a smile today; it can go a long way in your life and in someone else's.

Attention Everyone!  We have a new MEET-UP group!

Click and join and be up-to-date on any gathering/event we have!

I will be also be posting each gathering/event on the blog here, along with an RSVP email address (npi.info@telus.net).  You can let me know if you are interested in attending via that way, but please include in the email a photo and some information on yourself and why you are interested.

Note: Requests for (free) investigations are to be sent to npi.bc.ca@gmail.com

We had a fantastic time at the Pumpkin Festival in White Rock!  Thanks to everyone who came by for a visit and for sharing your stories.  Hopefully we can be there next year!
~Nikki
Posted by Nikki on October 29, 2012 No comments:

Come join us on Saturday October 27, 2012 for the West Beach Pumpkin Festival in White Rock from 11:00 am to 4:00 pm! You can find us out in front of Angelic Teapot, my favorite place to purchase tea!

We will have some EVP, photos and video clips everyone can listen to and see, and we will be able to show and explain some of our equipment we use on investigations.

We can also share with you some of our ghostly experiences!

If you have any ghost questions you wish to ask us about, feel free.  We love to try and answer any question that comes to us.  And if you need our services to do an investigation in your home, our services are FREE of charge, we are a non-profit group! 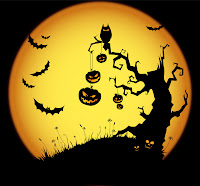 We also really would love to hear YOUR ghost stories!

So...come on down October 27, we will be waiting for you!

On Canada Day, we got to set up a tent at Coquitlam's Lafarge Lake Canada Day celebration!  It was a fantastic day, met a lot of great people, heard a lot of neat stories! I would like to thanks our whole team for making it out that day, and would like to thank everyone who stopped by to visit us!
One of the things we had set up were some EVP for people to listen to.  Not everyone was able to listen to them, and sometimes when the music festivities got too loud, it was too hard to hear them, so I am going to post those here for anyone who missed them!  Later on this week, I will post some of the wonderful drawings that some of the kids who stopped by did for us!

Enjoy! (You might want to use good non-noise reduction headphones to hear more clearly)

Get Rid Of Her

Man's Voice, I Love You, They're My Toys

Thanks,
Nikki Peterson
Co-Founder/Case Manager
Posted by Nikki on July 08, 2012 No comments: 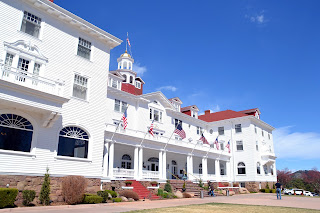 Tonight we are investigating at a residential property and it is looking to be quite interesting and perhaps bringing us into new "paranormal" territory.  We will be traveling to Burnaby, to an area we have not investigated yet.  Attending will be Darryl, Connie, Lisa, Steve and myself.  Steve is putting his birthday plans (HAPPY BIRTHDAY STEVE) on hold to attend.  Ken and Holly will not be there, but will be missed!

Wishing everyone a safe and wondeful evening!

Great news for this weekend! Vancouver Paranormal Society has invited Northern Paranormal Investigations along on another investigation!  This weekend, we will be spend two nights investigating a residential situation which has the potential to be very VERY interesting. Situatued in Harrison Hot Springs, our time spent not investigating is sure to be wonderful!  Overall, it should be a great weekend and for one am ready to get going in the morning for a mini road-trip to Harrison. 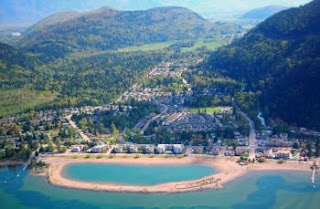 One of our members was browsing through the local paper and came across an article titled: The best shots of 2011: Our photographer's picks. Included in the "best shots" was a photo that staff photographer Paul vanPeenen had taken of two NPI members (Darryl Pearson and Connie Seelinger) before our Halloween meet & greet in Port Moody at the It's My Party Shop!

Check out the article here:
The best shots of 2011: Our photographer's picks

The photo in question? 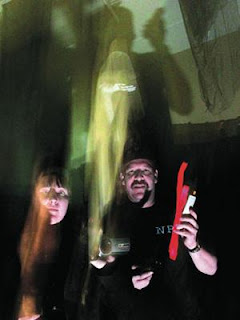 Thank you to Paul vanPeenen, the Coquitlam Now, Darryl Peason, and Connie Seelinger.