Residential Investigation
Following is a brief account of one of our private residential investigations. Client names have been changed to protect their identity.
With residential investigations a group just never really knows what they are going to run into. The Client had a lot of information on the history of the site, and explained to us the personal experiences her and her family had.
During our initial meeting with Leanne, NPI was informed that not only was she experiencing things in her home, but also her daughter Tracy and Tracy’s boyfriend were having experiences. Her son did not seem to sense anything in the house (although we did catch some EVP in his bedroom).

For some reason, most of the reported activity seemed to be centered around Tracy’s room. Leanne is somewhat sensitive and feels Tracy might have inherited this trait and is worried that something might be hanging around Tracy. Leanne had a few psychics brought into her house, some who said there was a vortex in front of Tracy’s room. Leanne had also brought people in to bless the house, which was not successful. She eventually heard about our team and contacted us, in hopes we could find out what was going on.
Leanne told us that people would experience the feeling of being watched in Tracy’s room, and that objects would be moved around her room. Shadows are reported to be seen throughout the house, and also a general uneasiness.
After our initial meeting, three members of NPI set out to investigate the home for the night. The hours went by fairly quietly, but in Tracy’s room, all three investigators had the feeling that one picture was causing apprehension and uncertainty. One of the investigators could feel a mental/psychical blockage in front of the door to Tracy’s bedroom. It was only later that she was told about the supposed vortex. Perhaps there really is something located there…but we could not confirm it.

During the course of the investigation, a shadow was seen in the kitchen three times, but was never caught on video and investigators were unable to either prove or debunk what had made the shadows, although they were able to determine that most outside sources could not have made them.
Now, earlier it was mentioned that it was a fairly quiet night, but even though it seemed quiet, we did manage to pick up some EVP throughout the night. All was not as quiet as we thought…
The rest of the information on the investigation is confidential (this is just a brief recounting out of many hours of investigation and interviews with the Client), so we will leave you here with some audio clips.
Please check out the EVP below and let us know what you think.
"Think Positive" 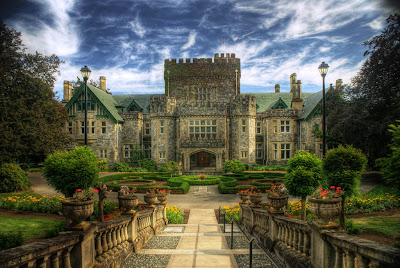 Located in the heart of picturesque Victoria, British Columbia, the Hatley Castle is a beautiful Victorian replica of a 15th century Edwardian castle built in 1908 by a wealthy rail baron named James Dunsmuir. At the time the castle was built, Dunsmuir was serving as the Premier and Lt Governor of British Columbia. Subsequently, the Hatley Castle hosted several of the area’s most elite and formal parties and high-society functions.
Tragedy struck the Dunsmuir family a few years later when their son, James Jr., was killed in World War I while serving in the military. James died in 1920 and his wife, Laura, and daughter, Eleanor, lived at the estate until Laura died in 1937 – Eleanor passed away a mere six months later.
In 1940, the castle was purchased and turned into the Royal Naval College of Canada, where some 600 volunteer reserve officers were trained. In the years since then, the training facility eventually became known as the Royal Roads Military College.
Since the academy’s inception back in 1940, there have been countless reports of apparitions and paranormal activity. The ghost of a woman, believed to be that of Laura Dunsmuir, has been seen lurking in dark corners and stairwells and warns young cadets that they may be subject to the same fate that her son was. The apparition of James Jr. has also been seen in his full military uniform, wandering around the lake near the Japanese Gardens on the property. Another ghost that haunts the old castle is Annabelle, a young servant girl who, after her love affair with a young trainee went sour during the early days of the academy, jumped to her death from a high window.
Today, the academy is known as the Royal Roads University; though it may have changed hands and names throughout the years, stories still persist regarding the ghosts that haunt Hatley Castle.
Thanks Holly F. for finding this story at http://www.hauntworld.com
Posted by Nikki on October 30, 2011 No comments:

NPI Meet & Greet - It's My Party Shop, Port Moody BC

We will have some EVP's, photos and video clips everyone can listen to and see,
and we will be able to show and explain some of our equipment we use on investigations.
If you have any ghost questions you wish to ask us about, feel free.
We love to try and answer any question that comes at us.
We also really would love to hear YOUR ghost stories!
So...hurry on down October the 22nd, we will be waiting for you!
ITS MY PARTY SHOP
2424 St. Johns Street
Port Moody, BC
V3H 2B1
http://www.itsmypartyshop.ca/