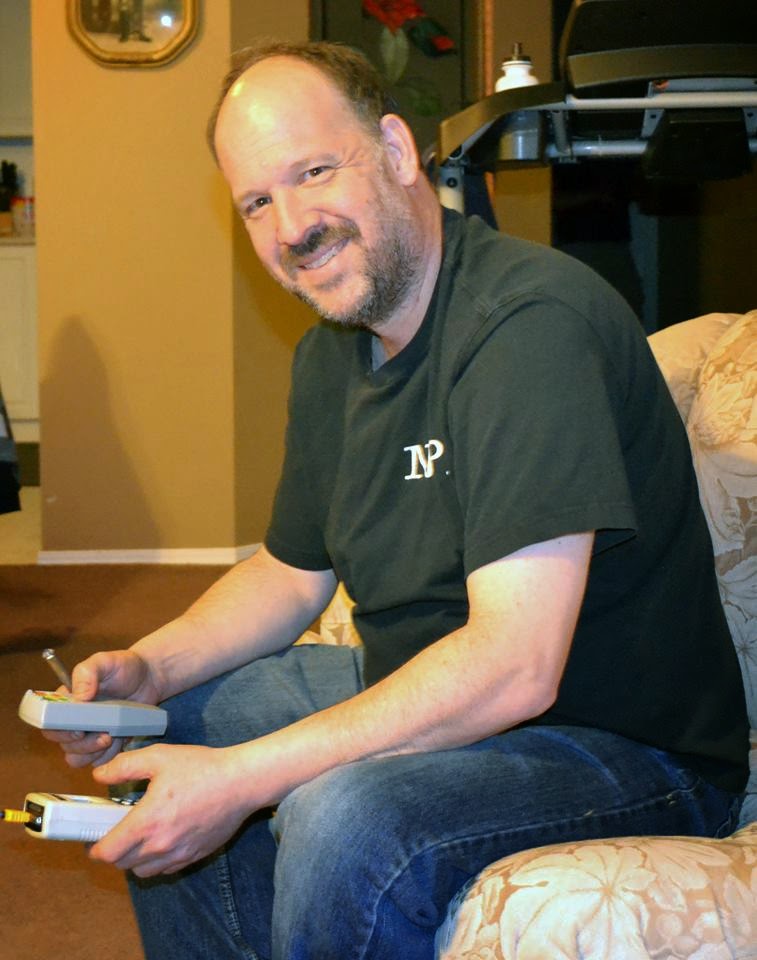 Darryl was born and raised in Ontario, Canada, and is the youngest of three children. He has lived in British Columbia for over 20 years and has been a welder-fabricator for most of that time.
Before that he lived in various places throughout Ontario and moved a lot. Darryl also came from a split family, but always had the support of both his parents. He started investigating the paranormal as a result of his drive to discover the truths and/or untruths behind the causes of paranormal activity, also having had a few experiences that put him on course with the paranormal.
Darryl is what some people call "sensitive" and has been known to see and feel things in ways others may not. He uses both his senses and technical equipment to investigate, and help people understand what they are experiencing; hopefully supply answers. As the founder of N.P.I. Darryl brings a positive, professional, enthusiastic energy to the group, which is an asset to all our investigations.
Darryl has been doing investigations into the paranormal for more than four years now and has gained a lot of experience in the field having been both a member and a lead investigator of another group. He feels with himself and his team’s knowledge that N.P.I. will be a group to look to for help and answers when needed.

NIKKI PETERSON, CO-FOUNDER & CASE MANAGER
Born and raised in Langley BC, Nikki has always lived in the lower mainland, and now resides in downtown Vancouver. Nikki has been interested in the paranormal since she was a little child when an elderly woman would come and sit in her room at night and sing to her, comfort her. As Nikki grew into adolescence, the paranormal activity around her grew in frequency and intensity. At this time, she was also introduced into the metaphysical realm. This is when she found out for sure about her “sensitivities” and telekinesis. By the time she was a young adult, she had already experienced so much relating to the paranormal, both good and bad.   Nikki comes with a resume that includes working with a few other investigative paranormal teams and brings with her the knowledge learnt with each one.
Every place Nikki has lived, she has had ghosts follow. Almost daily, things will be moved around, sounds made, unexplainable happenings, being touched and even on occasion she will actually see her visitors. Despite all of her personal experiences, she faces every moment as a skeptic first. She will never assume that any off thing happening is paranormal, no matter how weird it may seem.
When Nikki isn’t expanding her knowledge of the mysterious and unknown, you can usually find her at a coffee shop or the beach with a coffee and a good book. Her other hobbies include 8-ball, photography, videography, and poetry. When not working in her capacity as a paranormal investigator she is an administrative clerk for a large heavy construction/ engineering company. She loves her job and is thankful that she can work with such wonderful people. Nikki is also very close to her supportive family for who she can’t thank enough for all the love and guidance they have given her throughout the years.
When the opportunity came for Nikki to join Northern Paranormal Investigations, she knew it was the right thing for her to be doing and is happy to be living one of her dreams.


CONNIE SEELIGER, LEAD INVESTIGATOR
Connie was born and raised in Canada with her two younger brothers, mostly in British Columbia, but with some time spent being raised by her grandparents in Ontario. When Connie was a toddler, her first phrase was “OH WHAT’S THAT?”, and to today she still carries that same curiosity.

Since 1992, Connie has worked with animals in a variety of fields.
Over time, she has developed a sensitivity to different types of energies which not only make pets feel more comfortable with her, but also their owner’s and all her other customers. As time went by, she became more curious as to the sensitivities she was experiencing. In 1998 she began to study the Tarot, crystal energy and later on in 1999, Reiki energy practices. Today she finds passion in all her metaphysical interests and abilities, continuing to learn more about connections between the natural elements, embodied, and un-embodied energies.
Connie has been interested in the paranormal for many years and over the last few years been involved in the investigation aspect for a few different groups in the field. Connie brings a unique sense and outlook to N.P.I. and is always looking for answers to what is happening around her and to her. This is one of the few reasons which make Connie an irreplaceable asset to N.P.I.
Some of Connie’s loves and hobbies include dogs, Reiki, every medium of art, camping, hiking, gardening, learning, reading wisdom, tarot, geology and all the like.
Finally, one of Connie’s favoured quotes:
"Everybody has the ability to do anything I do and much beyond. Some of you will and some of you won't. For those of you who won't, it will be because you get in your own way, not because the world won't allow you." ~Warren Buffett~

Born and raised in Vancouver, Holly has always had a keen interest in the paranormal. This was perhaps sparked by two unmistakable encounters at a young age.
Despite her belief in the paranormal she maintains a healthy scepticism during investigations until there is absolute, unmistakable proof of paranormal activity.
With Holly’s great approach to investigating and her drive to find the truths or untruths associated with reported activity, she is an integral part of investigations and our group.

Ken is originally from Vancouver B.C. and recently he and his wife Holly, one of NPI’s investigators, has moved to the Fraser Valley into a beautiful new home.
Ken is an open minded sceptic awaiting an awakening, which has made him a very different kind of investigator in the group. Trained in the skills of problem solving, conflict resolution and pro-active listening, Ken brings a very wide range of views and ideas to all our investigations.
Ken feels every investigation is an opportunity to learn, prove and/or debunk claims and to experience new exciting possibilities, some of which are unexplainable.
Ken hopes that working with NPI's skilled team, that he will not only gain answers to the client's questions, but answers to some of his own as well.

Originally from England, Steve moved to Vancouver in 2005.

Steve has been intrigued and fascinated by the paranormal and unexplained for as long as he can remember. Growing up in Salisbury, Wiltshire and travelling to many cities around the UK, Steve has been spoilt with getting to stay in many buildings steeped in history, which has given him his fair share of hair raising and eye opening experiences.


Steve would share his stories and think to himself that it would be exciting to go back to these places and try to capture these events, but not many people were actually willing to do this, so he would just keep thinking about it and wait for the next time he could stay in an old creepy building.


Steve has always wanted to investigate further but had no idea how to go about it. Years ago after watching a new UK television show 'Most Haunted', he thought he could finally get his fix of something he thought he was never going to get a chance to do. Then more and more realistic shows came to air, with people who wanted to explain what else could be responsible for these happenings and he always wondered how does someone get into that?!