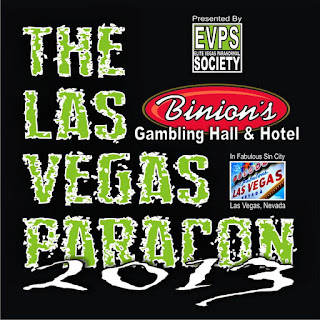 I will be heading down to Vegas this summer to check out The Las Vegas Paracon. This will be my first time at this particular event. It is sure to be another wonderful experience!  (It's Vegas, of course it will be!)
http://elitevegasparanormalsociety.com/The_Las_Vegas_Paracon.html
https://www.facebook.com/pages/The-Las-Vegas-Paracon/100158650139145

The Las Vegas Paracon is a 3 day event beginning Friday, August 23rd, through Sunday, August 24th. Join Celebrity Guests and Paranormal Teams and Enthusiasts from around the world!

Saturday, August 24th will be a day of Paranormal Speakers, Workshops, Vendors, Food, and Drink. Saturday night is highlighted by the second Paranormal Investigation of this Historic Casino!

Sunday, August 25th begins with a Paranormal Hangover Breakfast, followed by Paranormal Speakers, Workshops, Vendors, Food, and Drinks. Sunday is your chance to get out and explore The Fremont Street Experience, and try your hand at the tables and slots!

** There are still some Friday and Saturday night investigations tickets left!!!!

Forbidden Plateau ~ The Legend: When the Comox people faced raids from other coastal tribes, they took their women and children to the plateau for safekeeping. Once, during a raid by the Cowichan, the women and children vanished without a trace. When a member of the tribe went looking for the women and children within the Forbidden Plateau, he found red lichen covering the snow and nearby rocks and assumed the lichen to be blood from the family members. Since then, the plateau has become taboo for it was believed that it was inhabited by evil spirits who had consumed those they had sent. ~Wikipedia. Links to further info supplied on Wikipedia.  http://en.wikipedia.org/wiki/Forbidden_Plateau

If you have any stories to share about this location, please email us at  npi.bc.ca@gmail.com.


Our thoughts and prayers are with everyone (and their animals) in Moore, Oklahoma.

You will grow stronger, Oklahoma.

I’d like to take a few moments to tell you about an experience I had about 20 years ago on a small island just outside Castlegar, BC. It’s called Zuckerberg Island. When I was about 14 years old I went to Nelson to stay with my father for a few weeks during the summer. My older brother was living with him at the time. One evening, my brother and a few of his friends took me to Zuckerberg Island, but to this day I don’t recall what the main reason for going was, I can only recall the events that took place for me when I was there.
It had to be about 6pm when we arrived, because the sun was just starting to go down. Now, if you're familiar with the island's layout, there is a rather large suspension bridge, that sits maybe 100- 150 ft. above ground (not sure how high it actually was) that connects the parking area to the island itself. If I had to guess, I would say it takes approximately 15 mins to cross it (at the walking speed of a 14 yr. old). The visit to the island started out quite normal; we crossed the bridge, and found our way to an open area where there were benches and tables for sitting at. We sat around for some time socializing and taking in the sights. After a while it started getting darker and darker. Before long, I had noticed a young girl sitting alone on one of the benches across the open field. I didn’t think anything of it at first; she just seemed to be sitting there observing our activities. Me being a 14 yr. old boy, I was paying extra attention to her as she sat there...
This went on for about 30 minutes and my curiosity got the better of me. I decided I would try to talk to her and find out why she was there alone. I glanced away for what only seemed like a quick moment to inform my brother that I was going over to talk to the girl on the bench, but when I turned back toward the bench, the young girl was gone. It was at that time, I discovered that no one else in the group had noticed anyone sitting in the area we were in. I felt a bit uneasy about that, but put it aside thinking maybe I was just seeing things. As it grew darker, it also became colder so we all decided we would head back to the car. Just as we were leaving the open area I decided to glance back at the bench to see if the mystery girl had returned and to my surprise she had. I quickly got my brothers attention and pointed her out, this time he did see her. As we made our way towards the suspension bridge to cross back to the parking area I noticed that the young girl had begun to follow us. We tried to call out to her to see if she wanted to walk with us but got no response in return, she simply continued to follow us. Just before we reached the bridge we had noticed that she had quickened her pace and was starting to catch up to us, still not answering anyone’s attempts to talk to her. We were all a bit scared at this point and decided to start running towards the bridge. We began crossing the bridge, my brother in front followed by his friends and lastly, me being the youngest, I was also apparently the slowest...I was about half way across the bridge, my brother and his friends already across, when I started to feel like someone was directly behind me reaching out to me. I was too afraid to turn around and look, but I could hear my brother yelling for me to run faster. About three quarters of the way across I decided to look behind me and saw the same young girl only a few feet behind me. I closed my eyes and ran as fast as I could to the end of the bridge, when I got there, I again turned around; only this time there was no one there. The girl had vanished. Since I knew for sure she hadn’t passed me at the end of the bridge, the only other way to go was back to the other side of the bridge, but that would've taken at least 4-5 minutes to cross at full running speed. However, there was no one on the bridge or on the other side. At that point, I was completely scared and wasted no time getting into the vehicle and leaving. As we were driving away, my curiosity again got the better of me and I turned towards the bridge one last time. The young girl was standing on the bridge only a few feet from where I had stopped to see if she was there. To this day, I still remember the expression on her face. It was an expression of such sadness I had never seen before, nor have I ever seen since. About a week later my brother told me he had heard about a young girl around my age that had committed suicide off the suspension bridge a few years back. Now, I don’t know if there is any truth to what my brother told me in regards to the suicide, but I do know what I saw that night.

I have made some inquiries as to the validity of what I saw that night, but have only got such responses as, "Zuckerberg Island is known to be haunted" or "there have been reports of occurrences on the island over the years.

Part of me hopes that in sending this to you, it may help others tell their stories as well, and possibly reaffirm for me that we weren’t just having some weird "afraid of the dark" moment...

Thank you Lloyd for sharing your story.  If anyone is interested in learning more about Zuckerberg Island, check it out here:  http://www.stationmuseum.ca/zuckerberg/

Hi I came across your site as I've been looking for any information about something I experienced last night. I was driving home down Wain Road in North Saanich on Vancouver Island. I'd turned off the highway and started down Wain Road and put my high beams on. I saw what looked like a young man dressed in dark clothing walking down the road (into on coming traffic direction) and walking in the cycling lane. Common practice for people walking down the road. So as soon as I saw him I turned my high beams down so that I wouldn't blind him as I approached. I kept my eye on him as I drove toward him and he suddenly was gone! No sign of him anywhere! Today I drove the road again a couple of times to see if there was anything that it could've been and there was nothing there I could've mistaken for a person who was definitely walking towards me last night.

NPI would like to hear back from anyone who has heard of, experienced or know any history regarding this area/road a man and unexplained activity there.

Please email us at npi.bc.ca@gmail.com if you have any information.