Hycroft Manor, and the Veteran spirits 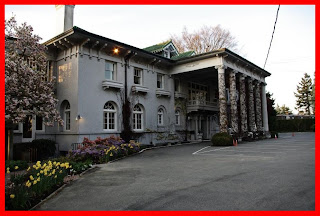 This manor home is one of the older and more beautiful manors in Vancouver, British Columbia.

The beginning of construction was in 1909, and completed in 1911, for Alexander Duncan McRae. In 1942 it was given to the Veterans Affairs for use as a convalescent hospital until 1960, where it was then bought by a woman’s club, where it remains today.

The activity reported in Hycroft Manor is widely varied. Including the sighting of an elderly man dressed in a World War I uniform that some believe to be General McRae himself. Others have seen a woman appear, who some believe might be McRae’s wife.

With Hycroft Manor having been used as a hospital in the past, people have seen up to three apparitions of WWI vets, and at other times a nurse from around the same time period.

Some of the most disturbing sounds heard, have been of men crying. No one knows why, but a lot believe it has to do with the wounded that were kept and possibly died there. It also seems a lot of activity happens when there are film crews working there.

"Hourglass" of Smallville. Thanks.