Hotel Vancouver, and The Lady In Red 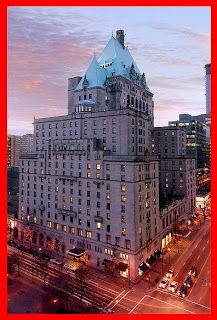 The Hotel Vancouver is one of the best, well-known hotels on the West Coast of British Columbia. It is unmistakable with its cooper roofs, gargoyles and service surpassed by few.

This landmark is known for many things, but the one that stands out is The Lady In Red.

The lady is said to be a ghost that haunts the 14th floor, she appears dressed all in red to those who see her.

The accounts that have been reported include; the lady being seen walking on a ledge that does not exist on the building. The Hotel elevator seems to make unscheduled stops on the 14th floor and when the doors open the lady appears along the hall seeming to float as she moves.

So next time you stay at this great hotel, be sure to make a stop on the 14th floor and see if you can catch a glimpse of The Lady in Red.

Gratefulness for splitting such wonderful information with us and I hope you will also share again such superior information, I am again very thankful to you for

providing meaningful information with us.Hotels in Saskatoon...plz keep sharing, Are u share again such info