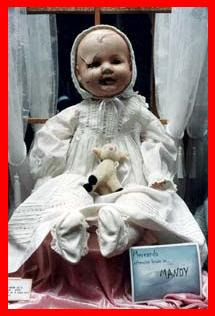 Mandy, who now resides at the Quesnel Museum, is a girl you will never forget meeting.

Just to look at her—all you see is a pretty doll that has been around for about ninety years and looks it. When she was first donated to the museum in 1991, she was dirty, ripped and cracked.

If you think that there is anything paranormal about Mandy, go visit her at the Quesnel Museum, BC or look her story up online.

I want to see this doll in person!

Same here! I would love to see this doll in person.

She was my doll when I was young..

I have seen the doll in person many times an will vouch anyone who feels the presence and sadness and mixed feelings around the doll. I believe strongly that this is real as I have looked onto her in person an been there many times. It is quite an eerie experience.

I so want to visit Mandy one day...

My mom volunteered at the Museum when the doll was donated

Be proud of what you have and be sports in whatever you do. Visit my site for more information.

Mandy is living with me at my home I love her, we both communicate through telepathy and the pendulum . I bought her two dresses. She is so beautiful with her red velvet Christmas dress! Mandy is very happy with me. To everyone out there love you all!

We are all like flowers that blooms or withered in the garden depending on how we take good care of our self. So do not let negativity pass through. Enjoy and be confident. Have a good day and visit my site for more information.

Had a sense of wanting to comfort her...didn't make me feel uneasy at all...

at 10 I felt uneasy because I was a kid I kind of felt like I was unwelcome and sadness. I felt scared because even tho ever since I was a kid that I could see ghosts I never felt how they felt it was new to me. I felt her staring at me.

There are definitely lots of details like that to take into consideration. That is a great level to deliver up. I supply the ideas above as basic inspiration however clearly there are questions like the one you bring up where the most important factor might be working in trustworthy good faith. I don?t know if greatest practices have emerged around things like that, however I'm positive that your job is clearly recognized as a fair game. Each girls and boys really feel the affect of just a moment’s pleasure, for the rest of their lives. gsn casino slots