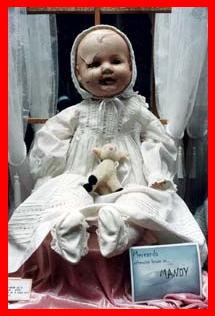 Mandy, who now resides at the Quesnel Museum, is a girl you will never forget meeting.
Just to look at her—all you see is a pretty doll that has been around for about ninety years and looks it. When she was first donated to the museum in 1991, she was dirty, ripped and cracked.

If you think that there is anything paranormal about Mandy, go visit her at the Quesnel Museum, BC or look her story up online.
Posted by Nikki on May 04, 2014